With over 3,000 via ferratas globally, it is surprising that so many people have not even heard the term yet! For those that may not be familiar, via ferrata is Latin for “iron way”. The very first iron roads were built during World War I in the Dolomites, a mountain range in Italy. These roads were a way for soldiers to survey and traverse across the mountain tops. Hikers of the era quickly realized how helpful these roads were in both scaling and descending mountains. To this day, via ferratas are a very popular adventure option to get breath-taking mountain views. No matter what level of adventure you are looking for, there is a Via Ferrata out there for you! Below, we will outline just a few of the via ferratas around the globe.

Let’s start where it all began, in the Dolomites. There are over 200 via ferratas across the Dolomite region, and even more throughout Italy, with the longest being almost 7 miles in length. If you have the time, some of these via ferratas offer “rifugios”, or mountain huts, for you to stay in overnight. Many of the via ferratas throughout the Dolomites offer views of the trenches and tunnels used during the First World War – perhaps one of the most hands-on history lessons you can experience!

Another popular via ferrata destination is France, housing more than 200 routes throughout the country. Perhaps one of the most versatile being Les Bettières at Peisey-Nancroix, a 1600+ foot long via ferrata that offers 3 different sections of increasing difficulty. This particular course offers something for every adventure seeker in the family.

One of the most interesting via ferratas is in Switzerland. During the almost 1.5-mile course, you’ll traverse along a cliffside, over a tightrope and a suspension bridge, and zipline across a ravine with nothing but a rushing river below you. Not for the faint of heart, the Mürren Via Ferrata is of moderate difficulty but will challenge any adrenaline junkie that dares to cross. 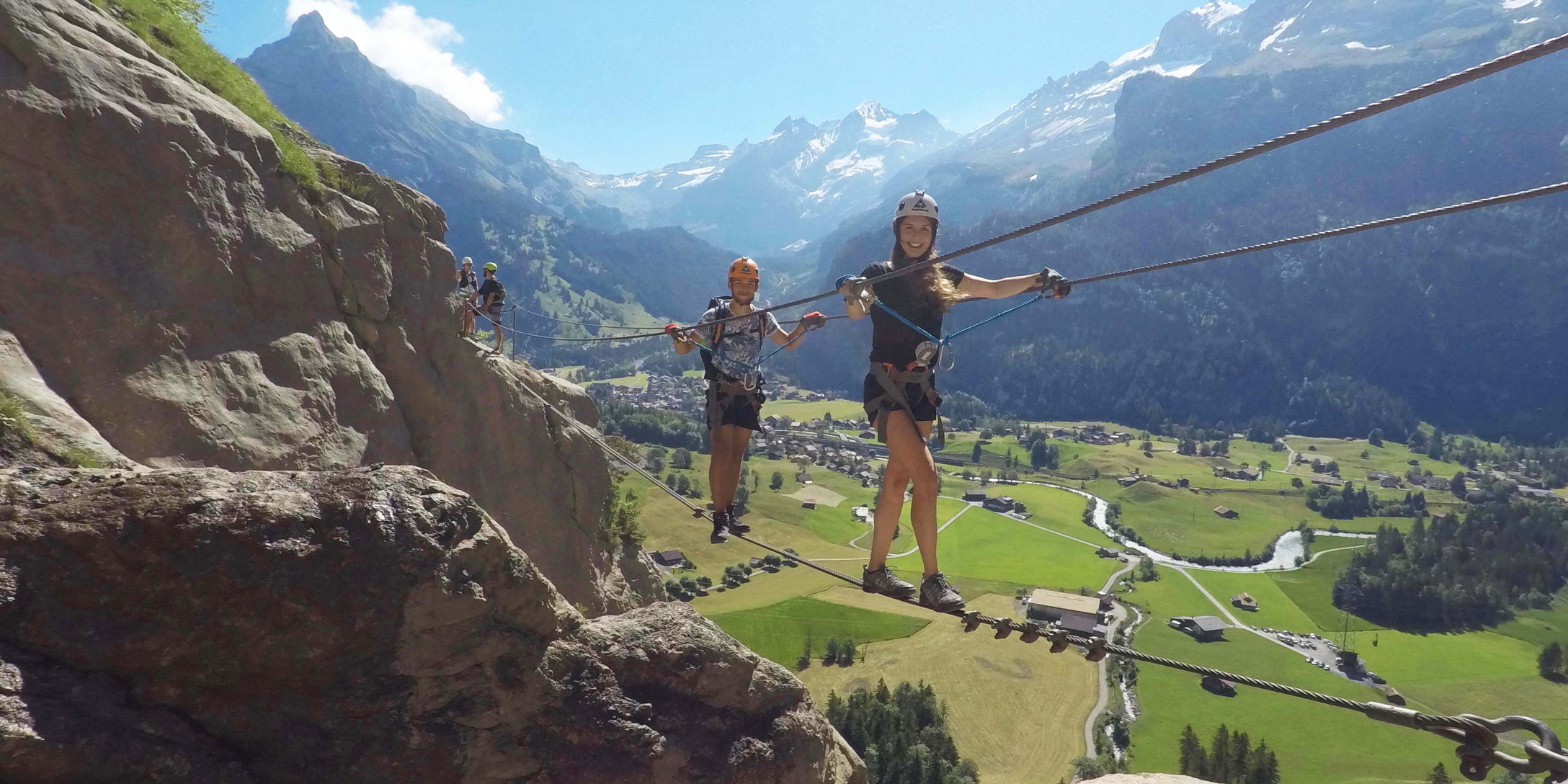 While there may not be quite as many via ferratas as there are in the Alps and the Dolomites, there are still almost 300 across Spain. Recreational via ferratas were not in Spain until the 1990s, now the Canary Islands house one of the world’s most difficult via ferratas, Ferrata Extraplomix. One of the nicest things about Spain’s via ferratas is that they are almost all accessible year-round as a result of the mild weather patterns.

Via ferratas are becoming a phenomenon across North America. The first one on forest land was built in 2016, but they’re rapidly spreading! You can visit the tallest via ferrata in North America right in our backyard at Arapahoe Basin. If you’re looking for a mountain adventure closer to Denver, you might consider AVA Rafting & Zipline’s Mount Evans Via Ferrata conveniently located in Idaho Springs. You’ll get beautiful views of historic Idaho Springs and the Chicago Creek and enjoy some ziplining with your via ferrata adventure. Maybe the city scene just isn’t for you. We also operate the Granite Via Ferrata from our scenic Buena Vista Outpost located just a few miles north of Brown’s Canyon National Monument. This ferrata offers amazing views of the Arkansas River as well as the Mosquito and Sawatch Mountain ranges. Many via ferratas trips can be found in a trip package with other adventures like whitewater rafting It’s important to note that a lot of global via ferratas do not require a guide, as they are set up like hiking trails in the United States. Guides are available for hire and are highly recommended for those that are not skilled mountain climbers. You can also rent gear for the day if you don’t happen to have your own set. Many via ferratas in the United States do require a guide service, but some are moving toward being accessible to the prepared public. Via ferratas are a great way to introduce yourself to rock climbing, as they are very similar activities. Typically, a via ferrata built for all ages will have ladders, bridges, or cables along the way to assist you while you climb. So, what are you waiting for? Let’s get climbing!