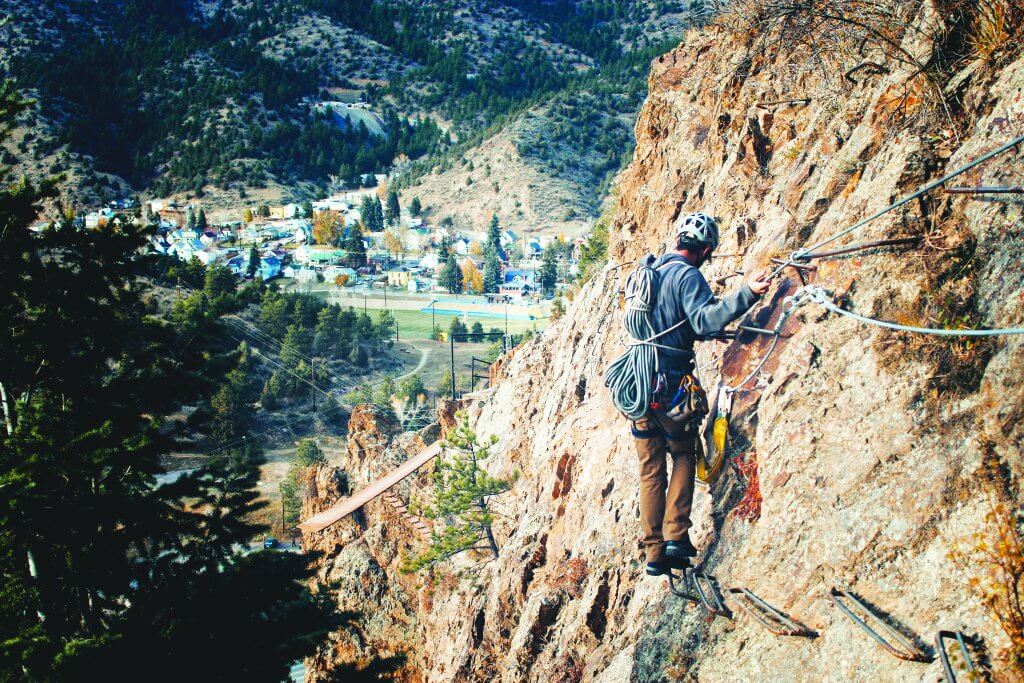 Via Ferratas are protected paths that allow climbers to traverse across and up otherwise challenging cliff faces. Using a series of iron rungs, cables and carved steps, via ferratas have been transforming seemingly impassable mountains and rock faces into passable trails for centuries. Via ferratas, meaning “Iron Path” in Italian, typically consist of an iron cable running along a path which is periodically bolted to the cliff side and used to provide a level of safety to these cliffside paths. This cable is used by both beginner and advanced climbers to keep locked in and secure to the course. Some modern day guided via ferratas even use carabiners with advanced technology that only allow one carabiner to be open at a time. This technology ensures that climbers will always be hooked into a cable. This gives the opportunity to climb over territory that would normally be very risky for even the most trained of climbers. Via ferratas vary in length from an hour to days. This gives an appeal for any level climber.

The earliest of via ferrata courses were not created for recreational use. Instead, these paths were used as early as the 19th century for travel and to move soldiers during World War 1. Some of the earliest known via ferratas were built in the Alps. Due to the steepness of the Northern Limestone in the Alps, the need for a secure pathway led to the creation of the via ferrata.

During the first World War, via ferratas were littered about the Dolomite Mountain region of Italy to assist the troops across the range. In 1914, the Dolomites mountain range was part of the Austro-Hungarian Empire, which was part in the Central Powers during the World War 1. In 1915, Italy decided to join the alliance of Britain, Russia, and France, also known as the Allied Powers during WWI. With their combined power, the Allied Powers went to war against the Central Powers. Austria’s troops committed their attention in Russia. It wasn’t long before these troops became a defensive line, which ran through the Dolomites Mountain. This gave the troops two elements to fight during the war: the conditions of the mountains and the war itself. Both sides tried vigorously to gain control of these mountain peaks for the benefit of observation posts and field gun locations.

In desperate need to move about in high altitude and extremely versatile conditions, the via ferrata was a lifesaver. The permanent lines fixed to the rock side allowed the troops to descend and ascend steep cliff sides. Most of the paths created for this purpose are still runnable today, with many relics in the cliff side such as trenches and dugouts from the first World War. These beautiful war structures has been restored, but it wasn’t until well after the World War 2. Restoration of these paths lead to some new features and additional safety measures, such as iron rungs, steel cables, ropes and ladders that are much more secure than the old wooden structures once used by the troops. The Dolomite via ferrata routes are now maintained by the Club Alpino Italiano (CAI).

Once these protected pathways were formed, the adventurist took note and took advantage. This started the trend of assisted tours to heights one would not have gotten to without these pre-built paths. Nowadays via ferratas can be found all over the world, from Kenya to China, Iceland to the United States. Currently there are well over 1,000 via ferratas around the world.

If you’re looking to give this historical adventure a go and are located in Colorado, AVA has two locations that allows any level of climber to try it out! Join us just 30 minutes from Denver for the Mount Evans Via Ferrata, or head to Buena Vista in the Arkansas River Valley for our Granite Via Ferrata. Both of these via ferrata courses are guided tours, about 3 hours in length. In addition to the traditional via ferrata elements, our courses are integrated with additional features to elevate your mountaineering experience, such as free falls, ziplining and more. Your via ferrata tour can be booked online or by calling 855-ZIPPING (855-947-7464).

9 of the Longest Via Ferratas in the World
Countdown to AVA's Idaho Springs Outpost Opening - We have less than two months until 2019 Spring Aerial Adventures!
SHARE: